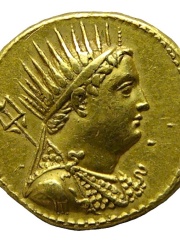 Ptolemy III Euergetes (Greek: Πτολεμαῖος Εὐεργέτης, romanized: Ptolemaios Euergetes, "Ptolemy the Benefactor"; c. 280 – November/December 222 BC) was the third pharaoh of the Ptolemaic dynasty in Egypt from 246 to 222 BC. The Ptolemaic Kingdom reached the height of its military and economic power during his kingship, as initiated by his father Ptolemy II Philadelphus. Ptolemy III was the eldest son of Ptolemy II and Arsinoe I. When Ptolemy III was young, his mother was disgraced and he was removed from the succession. He was restored as heir to the throne in the late 250s BC and succeeded his father as king without issue in 246 BC. Read more on Wikipedia

Ptolemy III Euergetes is most famous for his military campaigns against the Seleucid Empire and his victory in the battle of Raphia.

Among politicians, Ptolemy III Euergetes ranks 737 out of 15,577. Before him are Árpád, John III of Sweden, Charles IX of Sweden, Antiochus IV Epiphanes, Leonid Kuchma, and Louis Antoine de Saint-Just. After him are Anne of Brittany, Umberto I of Italy, Charles VII, Holy Roman Emperor, Jeroboam, Philip the Arab, and Josiah.

Others Deceased in 222 BC