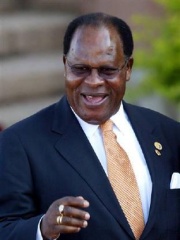 Elson Bakili Muluzi (born March 17, 1943 in Machinga, Nyasaland) is a Malawian politician who was the first freely elected President of Malawi from 1994 to 2004. He was also chairman of the United Democratic Front (UDF) until 2009. He succeeded Hastings Kamuzu Banda as Malawi's president. Read more on Wikipedia

Since 2007, the English Wikipedia page of Bakili Muluzi has received more than 148,943 page views. His biography is available in 34 different languages on Wikipedia making him the 5,811th most popular politician.

Among politicians, Bakili Muluzi ranks 5,776 out of 14,801. Before him are Jacques Chaban-Delmas, Emperor Ming of Jin, Francesco Farnese, Duke of Parma, Huzziya I, Duke Pius August in Bavaria, and Ashikaga Yoshiteru. After him are Carola of Vasa, Sisygambis, Margaret of Burgundy, Queen of Sicily, Prince Ferdinando, Duke of Genoa, Ulpia Marciana, and Guidobaldo da Montefeltro.