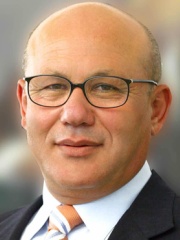 Mehmet Ali Talat (born 6 July 1952) is a Turkish Cypriot politician who served as the President of Northern Cyprus from 2005 to 2010. Talat is the leader of the social democratic Republican Turkish Party (Turkish: Cumhuriyetçi Türk Partisi, CTP), having previously held this position between 1996 and 2005. He became prime minister in 2004, and subsequently won the presidential election held on 17 April 2005. Read more on Wikipedia

Among politicians, Mehmet Ali Talat ranks 10,090 out of 15,710. Before him are Chen Jiongming, Ernest Augustus II, Duke of Saxe-Weimar-Eisenach, Brihadratha Maurya, Eero Mäntyranta, Tarmashirin, and Constantine III, King of Armenia. After him are Magdalena Sibylla of Saxe-Weissenfels, Maurice Hilleman, Guilhermina Suggia, Raymond-Roupen, Puzur-Ashur I, and Euphrosyne.