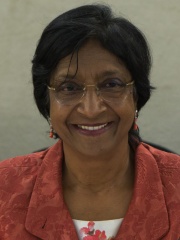 Navanethem "Navi" Pillay (Tamil: நவநீதம் பிள்ளை; born 23 September 1941) is a South African jurist who served as the United Nations High Commissioner for Human Rights from 2008 to 2014. A South African of Indian Tamil origin, she was the first non-white woman judge of the High Court of South Africa, and she has also served as a judge of the International Criminal Court and President of the International Criminal Tribunal for Rwanda. Her four-year term as High Commissioner for Human Rights began on 1 September 2008 and was extended an additional two years in 2012. Read more on Wikipedia

Since 2007, the English Wikipedia page of Navi Pillay has received more than 147,551 page views. Her biography is available in 27 different languages on Wikipedia making her the 37th most popular lawyer.

Among LAWYERS In South Africa