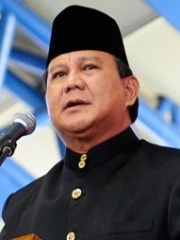 Prabowo Subianto Djojohadikusumo (born 17 October 1951) is an Indonesian politician, businessman and former Army lieutenant General who is the currently-appointed Minister of Defense of the Republic of Indonesia. He is the son of Sumitro Djojohadikusumo, an Indonesian economist, and Dora Sigar. He is the former husband of Titiek Suharto, the late President Suharto's second daughter. Read more on Wikipedia

Among politicians, Prabowo Subianto ranks 10,965 out of 15,710. Before him are John Hay, Otto II, Margrave of Brandenburg, Henry Oldenburg, Matsudaira Sadanobu, Tiridates I of Parthia, and Uhuru Kenyatta. After him are Erich Leinsdorf, Cenwalh of Wessex, James Mancham, Iskandar of Johor, Abigail Fillmore, and Ulises Heureaux.