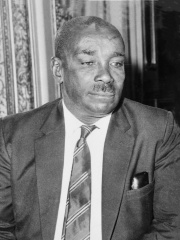 Abeid Amani Karume (4 August 1905 – 7 April 1972) was the first President of Zanzibar. He obtained this title as a result of a revolution which led to the deposing of His Majesty Sir Jamshid bin Abdullah, the last reigning Sultan of Zanzibar, in January 1964. Three months later, the United Republic of Tanzania was founded, and Karume became the first Vice President of the United Republic with Julius Nyerere of Tanganyika as president of the new country. Read more on Wikipedia

Since 2007, the English Wikipedia page of Abeid Karume has received more than 128,970 page views. His biography is available in 17 different languages on Wikipedia making him the 10,494th most popular politician.

Among politicians, Abeid Karume ranks 10,442 out of 14,801. Before him are Otto Graf Lambsdorff, Georgios Kountouriotis, Andres Tarand, Yusuf Lule, Manius Aquillius, and John Hay. After him are Alexander Rueb, Jahanara Begum, Boris Pankin, Eudamidas I, João do Canto e Castro, and Pakalitha Mosisili.