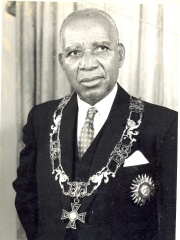 Hastings Kamuzu Banda (15 February 1898 – 25 November 1997) was the Prime Minister and later President of Malawi from 1964–1994 (for the first year of his rule as it achieved independence in 1964, Malawi was the British protectorate of Nyasaland). In 1966, the country became a republic and he became president. His rule has been characterized as a "highly repressive autocracy."After receiving much of his education in ethnography, linguistics, history, and medicine overseas, Banda returned to Nyasaland to speak against colonialism and advocate independence from the United Kingdom. Read more on Wikipedia

Since 2007, the English Wikipedia page of Hastings Banda has received more than 425,919 page views. His biography is available in 62 different languages on Wikipedia making him the 4,180th most popular politician.

Among politicians, Hastings Banda ranks 4,158 out of 14,801. Before him are Prithviraj Chauhan, Leopold, Prince of Hohenzollern, Petru Groza, Charles I, Landgrave of Hesse-Kassel, Sigismondo Pandolfo Malatesta, and Anna of Savoy. After him are Michal Kováč, Godigisel, Arsaces I of Parthia, Eutropius, Tokugawa Iemochi, and Plutarco Elías Calles.