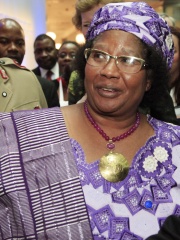 Joyce Hilda Banda (née Ntila; born 12 April 1950) is a Malawian politician who was the President of Malawi from 7 April 2012 to 31 May 2014. She is the founder and leader of the People's Party, created in 2011.An educator and grassroots women's rights activist, she was Minister of Foreign Affairs from 2006-09 and Vice-President of Malawi from May 2009 to April 2012.Banda took office as President following the sudden death of President Bingu wa Mutharika. She was Malawi's fourth president and its first female president and second female head of state after Elizabeth II. Banda was the second woman to become president on the African continent. Read more on Wikipedia

Since 2007, the English Wikipedia page of Joyce Banda has received more than 266,637 page views. Her biography is available in 51 different languages on Wikipedia making her the 8,145th most popular politician.

Among politicians, Joyce Banda ranks 8,101 out of 14,801. Before her are J. R. Jayewardene, Baldwin II, Count of Hainaut, Marcus Valerius Volusus, Bardas, Francesco Donato, and Marie Smith Jones. After her are John I, Margrave of Brandenburg, Ibn Muqla, Sidney Reilly, Sukhdev Thapar, Yaqub-Har, and László Bárdossy.