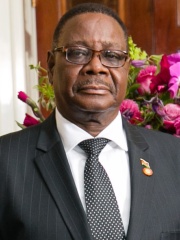 Arthur Peter Mutharika (born 18 July 1940) is a Malawian politician and lawyer who was President of Malawi from May 2014 to June 2020. Mutharika has worked in the field of international justice, specialising in international economic law, international law and comparative constitutional law. He informally served as an adviser to his older brother, President Bingu wa Mutharika, on issues of foreign and domestic policy from the onset of his election campaign until the President's death on 5 April 2012.He has also held positions as Minister of Justice and later as Minister for Education, Science and Technology. Read more on Wikipedia

Since 2007, the English Wikipedia page of Peter Mutharika has received more than 420,395 page views. His biography is available in 40 different languages on Wikipedia making him the 6,626th most popular politician.

Among politicians, Peter Mutharika ranks 6,586 out of 14,801. Before him are Emperor Jingzong of Liao, Publius Mucius Scaevola, Dervan, Emperor Xingzong of Liao, Gavril Radomir of Bulgaria, and Dorothea of Denmark, Duchess of Brunswick-Lüneburg. After him are William of Modena, Margaret, Countess of Anjou, Otto I, Duke of Carinthia, Georges-Charles de Heeckeren d'Anthès, Ivan Goremykin, and Antonis Samaras.