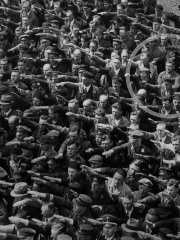 August Landmesser ([ˈaʊ̯ɡʊst ˈlantˌmɛsɐ]; 24 May 1910 – 17 October 1944) was a worker at the Blohm+Voss shipyard in Hamburg, Germany. He became known as the possible identity of a man appearing in a 1936 photograph, conspicuously refusing to perform the Nazi salute with the other workers. Landmesser had run afoul of the Nazi Party over his unlawful relationship with Irma Eckler, a Jewish woman. Read more on Wikipedia

August Landmesser was a member of the Nazi party and a worker at the Blohm & Voss shipyard in Hamburg. He was arrested for refusing to give the Nazi salute and was sent to a concentration camp.

Among politicians, August Landmesser ranks 3,044 out of 15,577. Before him are Charibert I, Guo Jia, Grand Duke Nicholas Nikolaevich of Russia, Prince Augustus William of Prussia, Pier Luigi Farnese, Duke of Parma, and Abbas II of Egypt. After him are Teos of Egypt, Odaenathus, Bardiya, Emperor Sakuramachi, Raymond VI, Count of Toulouse, and Henry II the Pious.