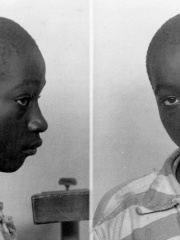 George Stinney Jr. (October 21, 1929 – June 16, 1944), was an African American boy, who at the age of 14 was convicted in 1944 (in a proceeding later vacated as an unfair trial in 2014), of murdering two young girls, Betty June Binnicker, age 11, and Mary Emma Thames, age 7, in his hometown of Alcolu, South Carolina. He was executed by electric chair in June 1944, thus becoming the youngest American with an exact birth date confirmed to be sentenced to death and executed in the 20th century.A re-examination of Stinney's case began in 2004, and several individuals and the Northeastern University School of Law sought a judicial review. Read more on Wikipedia

George Stinney was the youngest person to be executed in the United States in the 20th century. He was 14 years old when he was convicted of the murder of two young girls, Betty June Binnicker, age 11, and Mary Emma Thames, age 8. He was executed by electrocution in 1944.