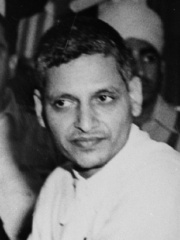 Nathuram Vinayak Godse (19 May 1910 – 15 November 1949) was the assassin of Mahatma Gandhi. He was a Hindu nationalist from western India who shot Gandhi in the chest three times at point blank range at a multi-faith prayer meeting in Birla House in New Delhi on 30 January 1948. Godse was a member of the political party, the Hindu Mahasabha; a former member of the Rashtriya Swayamsevak Sangh (RSS), a right-wing Hindu paramilitary volunteer organization; and a popularizer of the work of his mentor Vinayak Damodar Savarkar, who had created the ideology of Hindutva and ridiculed the philosophy of non-violence more than two decades earlier. Read more on Wikipedia

Nathuram Godse was a Hindu nationalist who assassinated Mahatma Gandhi in 1948.

Among EXTREMISTS In India

Among extremists born in India, Nathuram Godse ranks 1. After him are Dawood Ibrahim (1955).