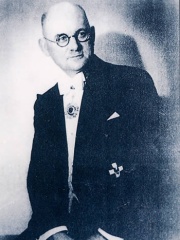 John Heinrich Detlef Rabe (23 November 1882 – 5 January 1950) was a German businessman and Nazi Party member best known for his efforts to stop atrocities of the Japanese army during its occupation of Nanjing (Nanking) and his work to protect and help Chinese civilians during the massacre that ensued. The Nanking Safety Zone, which he helped to establish, sheltered approximately 200,000 Chinese people from slaughter. He officially represented Germany and acted as senior chief of the European-U.S. Read more on Wikipedia

John Rabe was a Nazi businessman who helped save the lives of more than 200,000 Chinese people during the Nanking Massacre.

Among politicians, John Rabe ranks 3,737 out of 15,710. Before him are Karl Anton, Prince of Hohenzollern, Emperor Richū, Bretislav I, Nicomedes IV of Bithynia, Miguel Díaz-Canel, and Issey Miyake. After him are Hugh, Count of Vermandois, Nawal El Saadawi, Harald Quandt, Emperor An of Han, Chandragupta I, and Imagawa Yoshimoto.