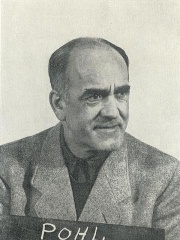 Oswald Ludwig Pohl (German: [ˈɔsvalt ˈpoːl] (listen); 30 June 1892 – 7 June 1951) was a German SS functionary during the Nazi era. As the head of the SS Main Economic and Administrative Office and the head administrator of the Nazi concentration camps, he was a key figure in the Final Solution, the genocide of the European Jews. After the war, Pohl went into hiding; he was apprehended in 1946. Read more on Wikipedia

Oswald Pohl was the head of the SS Economic and Administrative Main Office, which managed the concentration camps. Pohl was convicted of war crimes at the Nuremberg Trials.

Among politicians, Oswald Pohl ranks 3,110 out of 15,577. Before him are Sophonisba, Frederick I, Duke of Swabia, Léon Bourgeois, Prince Pierre, Duke of Valentinois, Emperor Cheng of Han, and Cardinal-Infante Ferdinand of Austria. After him are Nobusuke Kishi, Margaret of York, Alexander Karađorđević, Prince of Serbia, Gyeongjong of Goryeo, John George III, Elector of Saxony, and Marduk-apla-iddina II.