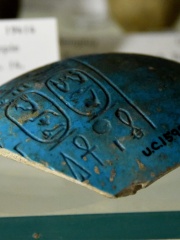 Since 2007, the English Wikipedia page of Teos of Egypt has received more than 85,032 page views. His biography is available in 29 different languages on Wikipedia. Teos of Egypt is the 3,543rd most popular politician (down from 3,224th in 2019).

The most famous aspect of Egypt is the pyramids. The pyramids were built by the ancient Egyptians.

Page views of Teos of Egypts by language

Among politicians, Teos of Egypt ranks 3,543 out of 15,710. Before him are Urraca of Castile, Queen of Portugal, Boris II of Bulgaria, Mohammad-Ali Rajai, Amenemhat II, Carme Forcadell, and Nobusuke Kishi. After him are Maharana Pratap, Seth-Peribsen, Artur Rasizade, Shalmaneser V, Alexander Karađorđević, Prince of Serbia, and Abdoulaye Wade.