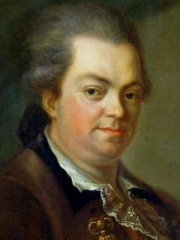 Count Alessandro di Cagliostro (US: , Italian: [alesˈsandro kaʎˈʎɔstro]; 2 June 1743 – 26 August 1795) was the alias of the occultist Giuseppe Balsamo (pronounced [dʒuˈzɛppe ˈbalsamo]; in French usually referred to as Joseph Balsamo).Cagliostro was an Italian adventurer and self-styled magician. He became a glamorous figure associated with the royal courts of Europe where he pursued various occult arts, including psychic healing, alchemy and scrying. His reputation lingered for many decades after his death, but continued to deteriorate, as he came to be regarded as a charlatan and impostor, this view fortified by the savage attack of Thomas Carlyle (1795–1881) in 1833, who pronounced him the "Quack of Quacks". Later works—such as that of W.R.H. Read more on Wikipedia

Among occultists, Alessandro Cagliostro ranks 9 out of 9. Before him are Grigori Rasputin, Baba Vanga, John Dee, Aleister Crowley, Count of St. Germain, and Helena Blavatsky. After him are Anton LaVey, Heinrich Cornelius Agrippa, Allan Kardec, Edgar Cayce, Joachim of Fiore, and Éliphas Lévi.

Among OCCULTISTS In Italy

Among occultists born in Italy, Alessandro Cagliostro ranks 1. After him are Joachim of Fiore (1135).