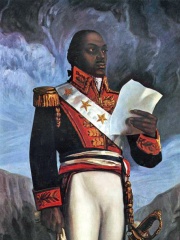 François-Dominique Toussaint Louverture (French: [fʁɑ̃swa dɔminik tusɛ̃ luvɛʁtyʁ]; also known as Toussaint L'Ouverture or Toussaint Bréda; 1743 – 7 April 1803) was a Haitian general and the most prominent leader of the Haitian Revolution. He first fought for the Spanish against the French; then for France against Spain and Great Britain; and finally, he fought on behalf of Saint-Domingue in the era of Napoleonic France. As a leader of the growing resistance, his military and political acumen saved the gains of the first black insurrection in November 1791, helping to transform the slave insurgency into a revolutionary movement. Read more on Wikipedia

Since 2007, the English Wikipedia page of Toussaint Louverture has received more than 2,257,711 page views. His biography is available in 47 different languages on Wikipedia making him the 53rd most popular social activist.

Among SOCIAL ACTIVISTS In Haiti