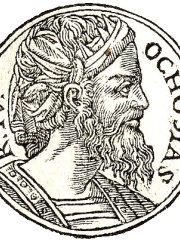 Ahaziah of Judah (Hebrew: אֲחַזְיָהוּ, ʼĂḥazyāhū; Greek: Οχοζιας Okhozias; Latin: Ahazia) or Jehoahaz I (2 Chronicles 21:17; 25:23), was the sixth king of Judah, and the son of Jehoram and Athaliah, the daughter (or possibly sister) of king Ahab of Israel. He was also the first Judahite king to be descended from both the House of David and the House of Omri, through his mother and successor, Athaliah. According to 2 Kings 8:26, Ahaziah was 22 years old when he began to reign, and reigned for one year in Jerusalem. Read more on Wikipedia

Ahaziah of Judah is most famous for being the king of Judah when the Assyrians conquered the city of Jerusalem in 722 BC.

Page views of Ahaziah of Judahs by language

Among politicians, Ahaziah of Judah ranks 1,950 out of 15,577. Before him are William Longsword, Heonjong of Joseon, Marie François Sadi Carnot, Sahure, Abbas II of Persia, and Hyeonjong of Joseon. After him are Lothair II, Wen Jiabao, Sancho I of Portugal, Muwatalli II, Klaus Iohannis, and Rugila.

Others Deceased in 842 BC