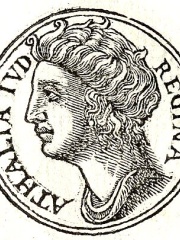 Athaliah (Hebrew: עֲתַלְיָה‎, Modern: ʻAtalya, Tiberian: ʿĂṯalyā, Greek: Γοθολία Gotholía; Latin: Athalia) was the daughter of either king Omri, or of King Ahab and Queen Jezebel of Israel, the queen consort of Judah as the wife of King Jehoram, a descendant of King David, and later queen regnant c. Read more on Wikipedia

Since 2007, the English Wikipedia page of Athaliah has received more than 613,701 page views. Her biography is available in 42 different languages on Wikipedia. Athaliah is the 99th most popular companion (down from 90th in 2019). (up from 9th in 2019)

Athaliah is most famous for being the last queen of Judah. She was the daughter of King Jehoram and Queen Athaliah, and the granddaughter of King Ahaziah. She became queen after the death of her father, and she ruled for six years until she was overthrown by a coup led by Joash.

Page views of Athaliahs by language

Among companions, Athaliah ranks 99 out of 673. Before her are Brigitte Macron, Isabella of Austria, Malhun Hatun, Katharina von Bora, Louise of Mecklenburg-Strelitz, and Isabeau of Bavaria. After her are Maria Luisa of Parma, Anna Pavlovna of Russia, Caterina Sforza, Adelaide of Italy, Emma of Normandy, and Julia Domna.

Others Deceased in 860 BC