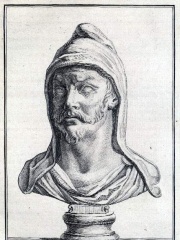 Bocchus, often referred to as Bocchus I for clarity, was king of Mauretania from c. 111 - 80 BCE. He was father-in-law to the Numidian king Jugurtha, with whom he initially allied against the Romans in the Jugurthine War, a lengthy and indecisive conflict. King Bocchus eventually betrayed Jugurtha to the Romans in 105 BCE. Read more on Wikipedia

Page views of Bocchus IS by language

Among politicians, Bocchus I ranks 5,729 out of 15,710. Before him are Paul Painlevé, Max Adler, Rusa II, Louis, Prince of Condé, Al-Mu'tamid, and Zakir Husain. After him are Theudigisel, Injong of Goryeo, Christian August of Holstein-Gottorp, Prince of Eutin, Otto I, Duke of Swabia and Bavaria, Prince Edward, Duke of Kent, and Prince Gong.