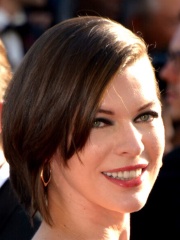 Milica Bogdanovna Jovovich ( YOH-və-vitch; born December 17, 1975), known professionally as Milla Jovovich, is an American actress, supermodel, and singer. Her starring roles in numerous science-fiction and action films led the music channel VH1 to deem her the "reigning queen of kick-butt" in 2006. In 2004, Forbes determined that she was the highest-paid model in the world.Born in Kyiv, Ukrainian SSR, Soviet Union, Jovovich emigrated with her parents to London when she was five, and then to Sacramento, California; they finally settled in Los Angeles seven months later. Read more on Wikipedia

Milla Jovovich is most famous for her role in the Resident Evil film series.