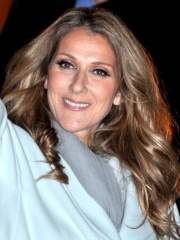 Céline Marie Claudette Dion (; born 30 March 1968) is a Canadian singer. She is noted for her powerful and technically skilled vocals. Dion is the best-selling Canadian recording artist, and the best-selling French language artist of all time. Read more on Wikipedia

Celine Dion is most famous for her singing. She has won five Grammy Awards and sold more than 200 million albums worldwide.

Among people born in 1968, Celine Dion ranks 3. Before her are Will Smith and Paolo Maldini. After her are Daniel Craig, Felipe VI of Spain, Hugh Jackman, Kolinda Grabar-Kitarović, Naomi Watts, Guy Ritchie, Frederik, Crown Prince of Denmark, Mika Häkkinen, and Didier Deschamps.