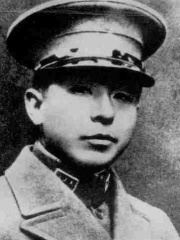 Chang Hsüeh-liang (Chinese: 張學良, 3 June 1901 – 15 October 2001), also romanized as Zhang Xueliang, nicknamed the "Young Marshal" (少帥), known in his later life as Peter H. L. Chang, was the effective ruler of Northeast China and much of northern China after the assassination of his father, Zhang Zuolin (the "Old Marshal"), by the Japanese on 4 June 1928. He was an instigator of the 1936 Xi'an Incident, in which Chiang Kai-shek, the leader of China's ruling party, was arrested in order to force him to enter into a truce with the insurgent Chinese Communist Party and form a united front against Japan, which had occupied Manchuria. Chiang agreed, but when he had an opportunity, he seized Chang, who then spent over 50 years under house arrest, first in mainland China and then in Taiwan. Read more on Wikipedia

Zhang Xueliang was most famous for the Xi'an Incident, when he and his troops captured the city of Xi'an from Chiang Kai-shek's Nationalist government.

Among politicians, Zhang Xueliang ranks 2,899 out of 15,577. Before him are Bolesław Bierut, Đurađ Branković, Reccared I, Prajadhipok, Ivan Asen II of Bulgaria, and Richard Baer. After him are Külüg Khan, 3rd Dalai Lama, Henry of Bohemia, Psamtik II, Louis II of Anjou, and Ahmad al-Mansur.