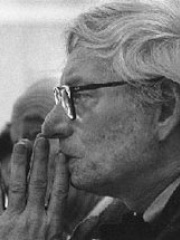 Louis Isadore Kahn (born Itze-Leib Schmuilowsky; March 5 [O.S. February 20] 1901 – March 17, 1974) was an American architect, based in Philadelphia. After working in various capacities for several firms in Philadelphia, he founded his own atelier in 1935. While continuing his private practice, he served as a design critic and professor of architecture at Yale School of Architecture from 1947 to 1957. Read more on Wikipedia

Since 2007, the English Wikipedia page of Louis Kahn has received more than 805,047 page views. His biography is available in 35 different languages on Wikipedia making him the 81st most popular architect.

Among architects, Louis Kahn ranks 81 out of 361. Before him are Vincenzo Scamozzi, Hector Guimard, César Pelli, Jean Nouvel, Mnesikles, and Peter Parler. After him are Peter Zumthor, Joseph Maria Olbrich, Eero Saarinen, Isidore of Miletus, Senenmut, and Toyo Ito.