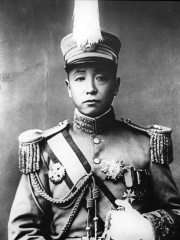 Zhang Zuolin (traditional Chinese: 張作霖; simplified Chinese: 张作霖; pinyin: Zhāng Zuòlín; Wade–Giles: Chang Tso-lin; March 19, 1875 – June 4, 1928), courtesy name Yuting (雨亭), nicknamed Zhang Laogang (張老疙瘩), was an influential Chinese bandit, soldier, and warlord during the Warlord Era in China. The warlord of Manchuria from 1916 to 1928, and the military dictator of the Republic of China in 1927 and 1928, he rose from banditry to power and influence. Backed by Japan, Zhang successfully influenced politics in the Republic of China during the early 1920s. Read more on Wikipedia

Zhang Zuolin was a warlord who controlled the northeast of China. He was most famous for being overthrown by the Kuomintang in 1928.

Among politicians, Zhang Zuolin ranks 2,956 out of 15,577. Before him are Louis Joseph, Duke of Vendôme, Robert II, Count of Flanders, Princess Irene of Greece and Denmark, Tahmasp II, Justa Grata Honoria, and Humbert I, Count of Savoy. After him are John Sherman, Gordian II, Thusnelda, Gudrun Burwitz, Taira no Kiyomori, and Louise of Lorraine.