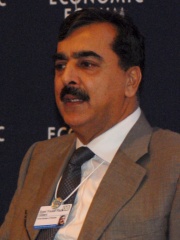 Syed Yousaf Raza Gillani, also spelled Gilani (Urdu: یوسف رضا گیلانی; pronounced [ˈjuːsʊf ˈrəzɑː ɡɪˈlɑːniː] born 9 July 1952), is a Pakistani politician who served as 18th Prime Minister of Pakistan from 25 March 2008 until his retroactive disqualification and ouster by the Supreme Court of Pakistan on 26 April 2012. He currently serves as the vice-chairman of the central executive committee of the Pakistan Peoples Party.After 1988 general elections, he secured his ministerial appointment in the Ministry of Tourism in the government of former prime minister Benazir Bhutto, and since then, he had been a senior member of parliament for the Multan District. After his party securing the plurality in the 1993 general elections, Gillani was elevated 15th Speaker of the National Assembly by the-Prime minister Benazir Bhutto, a post he held until 16 February 1997. Read more on Wikipedia

Since 2007, the English Wikipedia page of Yousaf Raza Gillani has received more than 466,230 page views. His biography is available in 51 different languages on Wikipedia making him the 12,457th most popular politician.