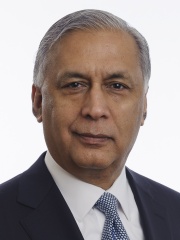 Shaukat Aziz (Urdu: شوکت عزیز‎; born 6 March 1949) is a Pakistani economist and financier who served as 17th Prime Minister of Pakistan from 20 August 2004 to 15 November 2007, as well as the a Finance Minister of Pakistan from 6 November 1999 to 15 November 2007. During his childhood he studied at St Patrick's High School, Karachi. Aziz graduated from the Institute of Business Administration in Karachi, and joined the corporate staff of the CitiBank Pakistan in 1969. Read more on Wikipedia

Since 2007, the English Wikipedia page of Shaukat Aziz has received more than 310,037 page views. His biography is available in 37 different languages on Wikipedia making him the 13,020th most popular politician.