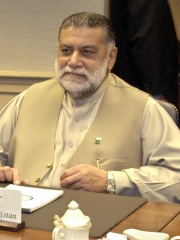 Mir Zafarullah Khan Jamali (Urdu: میر ظفراللہ خان جمالی‎; born 1 January 1944) is a Pakistani politician who served as the 15th Prime Minister of Pakistan from 2002 until his resignation in 2004. Originally a supporter of the Pakistan Peoples Party, Jamali emerged from the politics of Balochistan Province under military governor Rahimuddin Khan during the 1970s. He became a national figure as part of the government of Nawaz Sharif, and was Chief Minister of Balochistan for two non-consecutive terms (from June–December 1988 and November 1996 –February 1997). Read more on Wikipedia

Since 2007, the English Wikipedia page of Zafarullah Khan Jamali has received more than 166,850 page views. His biography is available in 22 different languages on Wikipedia making him the 13,097th most popular politician.