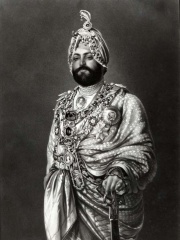 Maharaja Duleep Singh (4 September 1838 – 22 October 1893), also known as His Highness Maharaja Sir Duleep Singh, GCSI, or Sir Dalip Singh and later in life nicknamed the "Black Prince of Perthshire", was the last Maharaja of the Sikh Empire. He was Maharaja Ranjit Singh's youngest son, the only child of Maharani Jind Kaur. He was placed in power in September 1843, at the age of five, with his mother ruling on his behalf, and after their defeat in the Sikh Anglo War, under a British Resident. Read more on Wikipedia

Since 2007, the English Wikipedia page of Duleep Singh has received more than 1,126,674 page views. His biography is available in 16 different languages on Wikipedia making him the 12,437th most popular politician.

Among politicians, Duleep Singh ranks 12,335 out of 14,801. Before him are Ramsey Clark, Steven Mnuchin, Gabriela Michetti, Igor Sechin, Andrea Montermini, and Desmond Hoyte. After him are Coenwulf of Mercia, Aires Ali, Gustavo Jiménez, Jiří Rusnok, Leabua Jonathan, and John Mahama.