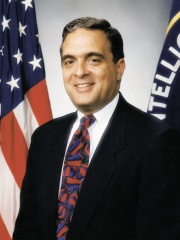 George John Tenet (born January 5, 1953) is a former Director of Central Intelligence (DCI) for the United States Central Intelligence Agency as well as a Distinguished Professor in the Practice of Diplomacy at Georgetown University. Tenet held the position as the DCI from July 1997 to July 2004, making him the second-longest-serving director in the agency's history—behind Allen Welsh Dulles—as well as one of the few DCIs to serve under two U.S. presidents of opposing political parties. He played a key role in overseeing intelligence regarding weapons of mass destruction in advance of the Iraq War. Read more on Wikipedia

Since 2007, the English Wikipedia page of George Tenet has received more than 798,999 page views. His biography is available in 28 different languages on Wikipedia making him the 12,754th most popular politician.