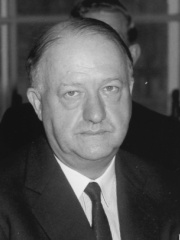 Richard Austen Butler, Baron Butler of Saffron Walden, (9 December 1902 – 8 March 1982), also known as R. A. Butler and familiarly known from his initials as Rab, was a prominent British Conservative politician. The Times obituary called him "the creator of the modern educational system, the key-figure in the revival of post-war Conservatism, arguably the most successful chancellor since the war and unquestionably a Home Secretary of reforming zeal." He was one of his party's leaders in promoting the post-war consensus through which the major parties largely agreed on the main points of domestic policy until the 1970s, sometimes known as "Butskellism" from a fusion of his name with that of his Labour counterpart Hugh Gaitskell.Born into a family of academics and Indian administrators, Butler had a distinguished academic career before entering Parliament in 1929. As a junior minister, he helped to pass the Government of India Act 1935. Read more on Wikipedia