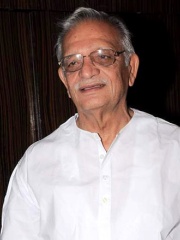 Sampooran Singh Kalra (born 18 August 1934), known professionally as Gulzar or Gulzar Saab, is an Indian lyricist, poet, author, screenwriter, and film director. He started his career with music director S.D. Burman as a lyricist in the 1963 film Bandini and worked with many music directors including R. D. Burman, Salil Chowdhury, Vishal Bhardwaj and A. R. Rahman. He was awarded Padma Bhushan in 2004, the third-highest civilian award in India, the Sahitya Academy Award, and the Dadasaheb Phalke Award — the highest award in Indian cinema. Read more on Wikipedia

Page views of Gulzars by language

Among FILM DIRECTORS In Pakistan