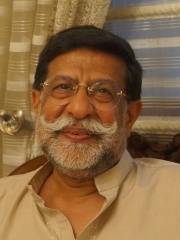 Muhammad Mian Soomro (Sindhi: محمد میاں سومرو; born 19 August 1950) is a Pakistani politician and a banker who currently serves as the Federal Minister for Privatization. Previously, he served as the Chairman of the Senate from 2003 to 2009, the caretaker Prime Minister of Pakistan from 2007 to 2008 and the acting President of Pakistan from 18 August 2008 to 9 September 2008. Soomro hails from an influential Sindhi feudal family that has been active in national politics since 1923. Read more on Wikipedia

Since 2007, the English Wikipedia page of Muhammad Mian Soomro has received more than 248,609 page views. His biography is available in 31 different languages on Wikipedia making him the 12,641st most popular politician.