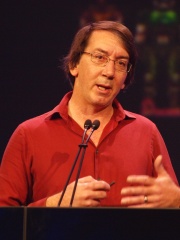 William Ralph Wright (born January 20, 1960) is an American video game designer and co-founder of the former game development company Maxis, and then part of Electronic Arts (EA). In April 2009, he left EA to run Stupid Fun Club Camp, an entertainment think tank in which Wright and EA are principal shareholders.The first computer game Wright designed was Raid on Bungeling Bay in 1984, but it was SimCity that brought him to prominence. Read more on Wikipedia

Page views of Will Wrights by language

Among game designers, Will Wright ranks 19 out of 46. Before him are Hironobu Sakaguchi, Toru Iwatani, Shinji Mikami, Lizzie Magie, Gary Gygax, and Klaus Teuber. After him are Tetsuya Nomura, Peter Molyneux, Yu Suzuki, Masahiro Sakurai, Hidetaka Miyazaki, and Eiji Aonuma.