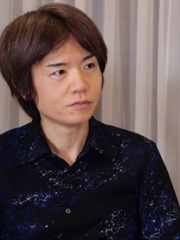 Masahiro Sakurai (桜井 政博, Sakurai Masahiro, born August 3, 1970) is a Japanese video game director, game designer and songwriter best known as the creator of the Kirby and Super Smash Bros. series. Apart from his work on those series, he also led the design of Meteos in 2005 and directed Kid Icarus: Uprising in 2012. Read more on Wikipedia

Among game designers, Masahiro Sakurai ranks 23 out of 46. Before him are Gary Gygax, Klaus Teuber, Will Wright, Tetsuya Nomura, Peter Molyneux, and Yu Suzuki. After him are Hidetaka Miyazaki, Eiji Aonuma, John Carmack, John Romero, David Cage, and Yoshinori Kitase.