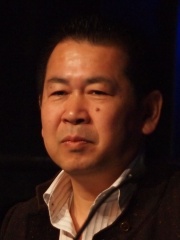 Yu Suzuki (鈴木 裕, Suzuki Yū, born June 10, 1958) is a Japanese game designer, producer, programmer, and engineer, who headed Sega's AM2 team for 18 years. Considered one of the first auteurs of video games, he has been responsible for a number of Sega's arcade hits, including three-dimensional sprite-scaling games that used "taikan" motion simulator arcade cabinets, such as Hang-On, Space Harrier, Out Run, and After Burner, and pioneering polygonal 3D games such as Virtua Racing and Virtua Fighter, which are credited with popularizing 3D graphics in video games, as well as the critically acclaimed Shenmue series. As a hardware engineer, he led the development of various arcade system boards, including the Sega Space Harrier, Model 1, Model 2, and Model 3, and was involved in the technical development of the Dreamcast console and its corresponding NAOMI arcade hardware.In 2003, Suzuki became the sixth person to be inducted into the Academy of Interactive Arts and Sciences' Hall of Fame. Read more on Wikipedia

Among game designers, Yu Suzuki ranks 22 out of 46. Before him are Lizzie Magie, Gary Gygax, Klaus Teuber, Will Wright, Tetsuya Nomura, and Peter Molyneux. After him are Masahiro Sakurai, Hidetaka Miyazaki, Eiji Aonuma, John Carmack, John Romero, and David Cage.