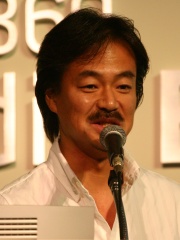 Hironobu Sakaguchi (坂口 博信, Sakaguchi Hironobu, born November 25, 1962) is a Japanese game designer, director, producer, and writer. Originally working for Square (later Square Enix) from 1983 to 2003, he departed the company and founded independent studio Mistwalker in 2004. He is known as the creator of the Final Fantasy franchise, in addition to other titles during his time at Square. Read more on Wikipedia

Among game designers, Hironobu Sakaguchi ranks 17 out of 56. Before him are Satoshi Tajiri, Sid Meier, Lizzie Magie, Toru Iwatani, Shigesato Itoi, and Shinji Mikami. After him are Klaus Teuber, Gary Gygax, Masahiro Sakurai, Peter Molyneux, Steve Jackson, and Will Wright.