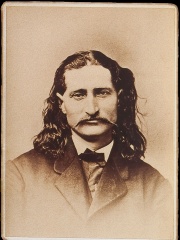 James Butler Hickok (May 27, 1837 – August 2, 1876), better known as "Wild Bill" Hickok, was a folk hero of the American Old West known for his life on the frontier as a soldier, scout, lawman, gambler, showman, and actor, and for his involvement in many famous gunfights. He earned a great deal of notoriety in his own time, much of it bolstered by the many outlandish and often fabricated tales he told about himself. Some contemporaneous reports of his exploits are known to be fictitious, but they remain the basis of much of his fame and reputation.Hickok was born and raised on a farm in northern Illinois at a time when lawlessness and vigilante activity were rampant because of the influence of the "Banditti of the Prairie". Read more on Wikipedia

Among companions, Wild Bill Hickok ranks 402 out of 687. Before him are Queen Anne of Romania, Blanche of Valois, Prince Joachim of Prussia, Gunilla Bielke, Natalia Sedova, and Berengaria of Barcelona. After him are Domitilla the Elder, Hemma, Amalia of Solms-Braunfels, Anne de Pisseleu d'Heilly, Elizabeth de Burgh, and Louise of Mecklenburg-Güstrow.