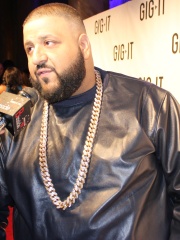 Khaled Mohamed Khaled (born November 26, 1975), better known by his stage name DJ Khaled, is an American DJ, record executive, songwriter, record producer, author, and media personality.Khaled first gained prominence as a radio host in the 1990s on the radio station 99 Jamz, and translated his popularity by working with Terror Squad as a DJ for their live performances. After gaining production credits on the group's material, Khaled released his debut studio album Listennn... the Album in 2006, which earned gold certification. Read more on Wikipedia

Since 2007, the English Wikipedia page of DJ Khaled has received more than 16,459,691 page views. His biography is available in 33 different languages on Wikipedia making him the 264th most popular singer.