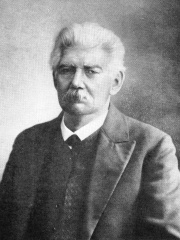 Vasily Vasilievich Radlov or Friedrich Wilhelm Radloff (Russian: Васи́лий Васи́льевич Ра́длов; 17 January [O.S. 5 January] 1837 in Berlin – 12 May 1918 in Petrograd) was a German-born Russian founder of Turkology, a scientific study of Turkic peoples. Working as a schoolteacher in Barnaul, Radlov became interested in the native peoples of Siberia and published his ethnographic findings in the influential monograph From Siberia (1884). From 1866 to 1907, he translated and released a number of monuments of Turkic folklore. Read more on Wikipedia

Since 2007, the English Wikipedia page of Vasily Radlov has received more than 23,066 page views. His biography is available in 25 different languages on Wikipedia making him the 43rd most popular linguist.

Among linguists, Vasily Radlov ranks 43 out of 117. Before him are Joseph Greenberg, André Martinet, Ignác Goldziher, Hesychius of Alexandria, Michel Bréal, and George Lakoff. After him are Charles Bally, Josef Dobrovský, Hermann Paul, Vatroslav Jagić, Vilhelm Thomsen, and Karl Lachmann.

Among LINGUISTS In Germany