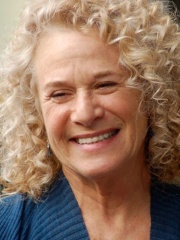 Carole King Klein (born Carol Joan Klein; February 9, 1942) is an American singer-songwriter who has been active since 1958, initially as one of the staff songwriters at the Brill Building and later as a solo artist. She is the most successful female songwriter of the latter half of the 20th century in the US, having written or co-written 118 pop hits on the Billboard Hot 100. King also wrote 61 hits that charted in the UK, making her the most successful female songwriter on the UK singles charts between 1962 and 2005.King's major success began in the 1960s when she and her first husband, Gerry Goffin, wrote more than two dozen chart hits, many of which have become standards, for numerous artists. Read more on Wikipedia