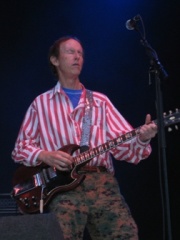 Robert Alan Krieger (born January 8, 1946) is an American guitarist and singer-songwriter best known as the guitarist of the rock band The Doors; as such he has been inducted into the Rock and Roll Hall of Fame. Krieger wrote or co-wrote many of the Doors' songs, including the hits "Light My Fire", "Love Me Two Times", "Touch Me", and "Love Her Madly". After the Doors disbanded, Krieger continued his performing and recording career with other musicians including former Doors bandmates John Densmore and Ray Manzarek. Read more on Wikipedia

Since 2007, the English Wikipedia page of Robby Krieger has received more than 1,351,801 page views. His biography is available in 31 different languages on Wikipedia making him the 394th most popular musician.