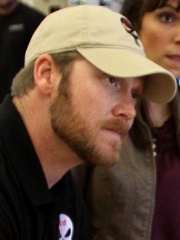 Christopher Scott Kyle (April 8, 1974 – February 2, 2013) was a United States Navy SEAL sniper. He served four tours in the Iraq War and was awarded several commendations for acts of heroism and meritorious service in combat. He was awarded one Silver Star Medal, four Bronze Star Medals with "V" devices, a Navy and Marine Corps Achievement Medal, and numerous other unit and personal awards.Kyle was honorably discharged from the U.S. Navy in 2009, and published his bestselling autobiography, American Sniper, in 2012. Read more on Wikipedia

Since 2007, the English Wikipedia page of Chris Kyle has received more than 18,875,497 page views. His biography is available in 40 different languages on Wikipedia making him the 563rd most popular military personnel.