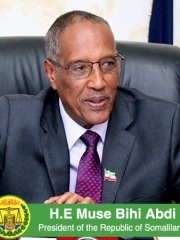 Musa Bihi Abdi (Somali: Muuse Biixi Cabdi, Arabic: موسى بيحي عبدي‎) (born 1948 in Hargeisa, Somaliland) is a Somaliland politician and former military officer who has been President of Somaliland since December 2017. During the 1970s, he served as a pilot in the Somali Air Force under the Siad Barre administration. In 2010, Bihi was appointed the Chairman of the ruling Kulmiye of Republic of Somaliland. Read more on Wikipedia

Among politicians, Muse Bihi Abdi ranks 12,192 out of 15,710. Before him are Jim Fouché, Chuck Schumer, Ashur-rabi I, Georg von Habsburg, Enlil-nasir I, and Vladimír Špidla. After him are Ugo Mifsud Bonnici, Muhammad Azam Shah, Richard Seddon, Laodice, Jean Asselborn, and Elise Richter.