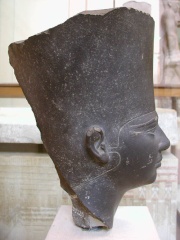 Userkaf (known in Ancient Greek as Οὐσερχέρης, Usercherês) was a pharaoh of ancient Egypt and the founder of the Fifth Dynasty. He reigned for seven to eight years in the early 25th century BC, during the Old Kingdom period. He probably belonged to a branch of the Fourth Dynasty royal family, although his parentage is uncertain; he could have been the son of Khentkaus I. He had at least one daughter and very probably a son, Sahure, with his consort Neferhetepes. Read more on Wikipedia

Since 2007, the English Wikipedia page of Userkaf has received more than 237,727 page views. His biography is available in 36 different languages on Wikipedia making him the 1,747th most popular politician.

Page views of Userkafs by language

Among politicians, Userkaf ranks 1,736 out of 14,801. Before him are Ajax the Lesser, Edward the Confessor, Lennart Johansson, Margaret of Anjou, Isabella of Aragon, Queen of France, and John I of Castile. After him are Edward the Martyr, Theophanu, Ptolemy X Alexander I, Archduchess Maria Anna of Austria, Gheorghe Gheorghiu-Dej, and Sirikit.