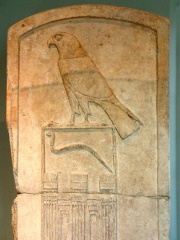 Djet, also known as Wadj, Zet, and Uadji (in Greek possibly the pharaoh known as Uenephes or possibly Atothis), was the fourth pharaoh of the First Dynasty. Read more on Wikipedia

Since 2007, the English Wikipedia page of Djet has received more than 204,468 page views. His biography is available in 43 different languages on Wikipedia. Djet is the 1,731st most popular politician (down from 1,649th in 2019), the 97th most popular biography from Egypt (up from 102nd in 2019) and the 42nd most popular Egyptian Politician.

Djet is most famous for being the goddess of the Nile River. She was depicted as a woman wearing a cow's head.

Page views of Djets by language

Among politicians, Djet ranks 1,731 out of 15,710. Before him are Paul Doumer, Jamukha, Emperor Ruizong of Tang, Hor-Aha, Urho Kekkonen, and Magnus IV of Sweden. After him are Emperor Wen of Han, Kubrat, Carinus, Constans, Henry, King of Portugal, and William V, Prince of Orange.