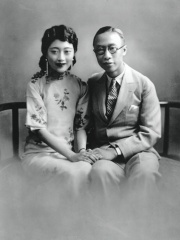 Wanrong (13 November 1906 – 20 June 1946), also known as Xuantong Empress, was the Empress Consort of Puyi, the Last Emperor of China and final ruler of the Manchu-led Qing dynasty. In 1932, when the Empire of Japan established the puppet state of Manchukuo in Manchuria (northeastern China) and installed Puyi as its nominal emperor, Wanrong became the empress of Manchukuo. During the Soviet invasion of Manchuria at the end of the Second Sino-Japanese War in 1945, Wanrong was captured by Chinese Communist guerrillas and transferred to different locations before she was settled in a prison camp in Yanji, Jilin. Read more on Wikipedia

Since 2007, the English Wikipedia page of Empress Wanrong has received more than 638,016 page views. Her biography is available in 16 different languages on Wikipedia making her the 3,112th most popular politician.