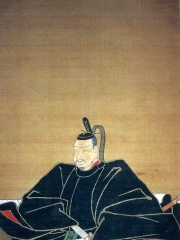 Date Masamune (伊達 政宗, September 5, 1567 – June 27, 1636) was a regional ruler of Japan's Azuchi–Momoyama period through early Edo period. Heir to a long line of powerful daimyō in the Tōhoku region, he went on to found the modern-day city of Sendai. An outstanding tactician, he was made all the more iconic for his missing eye, as Masamune was often called dokuganryū (独眼竜), or the "One-Eyed Dragon of Ōshu".As a legendary warrior and leader, Masamune is a character in a number of Japanese period dramas. Read more on Wikipedia

Masamune is most famous for the creation of a sword called "Kusanagi-no-tsurugi" or "Grass Cutting Sword." This sword was said to be one of the three Imperial Regalia of Japan and was used by the emperor during coronation ceremonies.