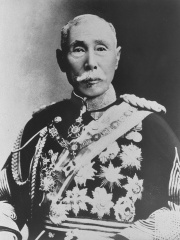 Gensui Prince Yamagata Aritomo (山縣 有朋, 14 June 1838 – 1 February 1922), also known as Prince Yamagata Kyōsuke, was a senior-ranking Japanese military commander, twice-elected Prime Minister of Japan, and a leading member of the genrō, an élite group of senior statesmen who dominated Japan after the Meiji Restoration. As the Imperial Japanese Army's inaugural Chief of Staff, he was the chief architect of the Empire of Japan's military and its reactionary ideology. For this reason, some historians consider Yamagata to be the “father” of Japanese militarism.During the latter part of the Meiji Era, Yamagata vied against Marquess Itō Hirobumi for control over the nation's policies. Read more on Wikipedia

Yamagata Aritomo is most famous for being the first Japanese prime minister to be born in Japan.