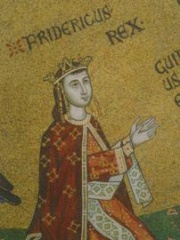 Frederick II (or III) (13 December 1272 – 25 June 1337) was the regent (from 1291) and subsequent King of Sicily from 1295 until his death. He was the third son of Peter III of Aragon and served in the War of the Sicilian Vespers on behalf of his father and brothers, Alfonso ΙΙΙ and James ΙΙ. He was confirmed as King of Trinacria (another name for the island of Sicily) by the Peace of Caltabellotta in 1302. Read more on Wikipedia

Since 2007, the English Wikipedia page of Frederick III of Sicily has received more than 92,365 page views. His biography is available in 27 different languages on Wikipedia making him the 1,956th most popular politician.

Page views of Frederick III of Sicilies by language

Among politicians, Frederick III of Sicily ranks 1,943 out of 14,801. Before him are Rugila, Ptolemy VIII Physcon, Dalia Grybauskaitė, Yuri Dolgorukiy, Edgar the Peaceful, and Amasis II. After him are Magnus the Good, Quintus Sertorius, Juvénal Habyarimana, Kayqubad I, Wallia, and Emperor Go-Momozono.